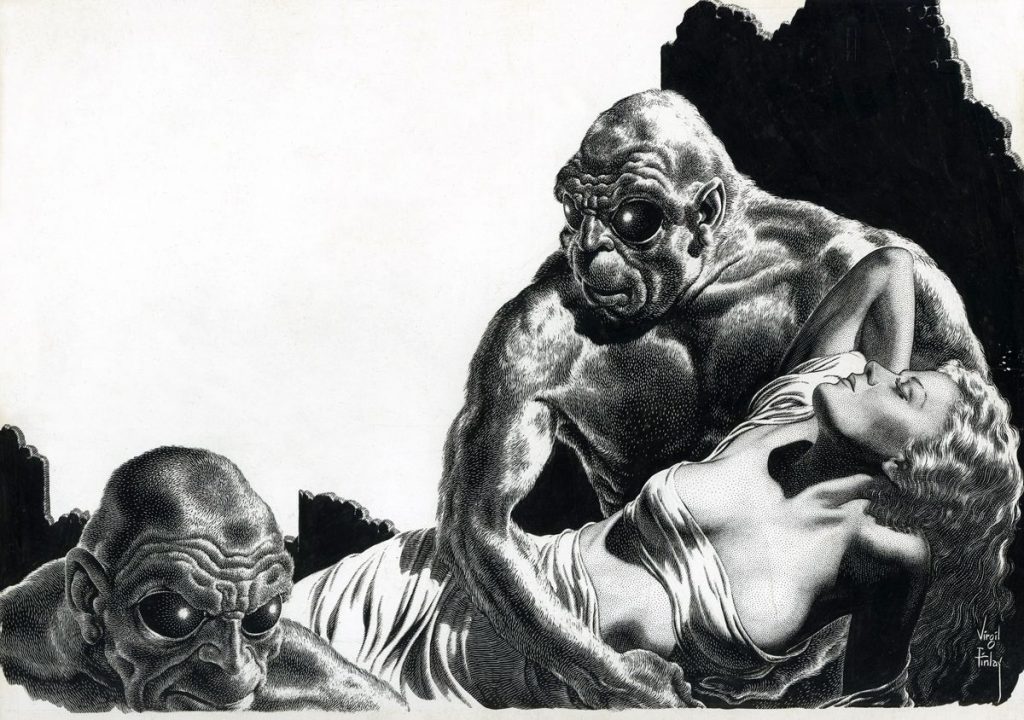 The Time Machine – an invention

In Herbert George Wells book ‘The Time Machine’, travellers into the future find that the human race has devolved in two degenerate sub-species. The Eloi are delicate and stupid frugivores, representing a Darwinian projection of the end of an upper social class with little care or responsibility. As the Time Traveller, a somewhat unreliable narrator (and in part Wells’ own voice) says, ‘We should .. welcome change and challenges because they .. help us grow. Without them we grow weak .. in comfort and security.’

The Morlocks stand in dark contrast. Robust and animalistic, they represent a devolved working class with some residual intelligence but devoid of morals or conscience. They tend the underground machinery that produces food and clothing for the Eloi, who they farm for meat.

Wells’ book is full of ideas, and one of them is that in order to remain human we have to find ways of binding our appetites to our ideals. This touches not only on the universal question of who and what we are, but also references the glaring fissures that ran through the Victorian society in which Wells lived. This was an overtly moral and Christian culture, and an astonishingly productive one, but for many these values were unaffordable. Due to extensive and absolute poverty, it has been estimated that one woman in six turned at some stage to prostitution to feed herself or her family (1).

(HG’s non-fiction writings are more contentious. They propose social engineering strategies which eventually spawned the techno-fascism of Bill Gates and Mark Malloch-Brown, making Herbert one of the most darkly influential writers of the 19th century.)

Friedrich Engels recognised the link between social class and health in mid-Victorian England (2) and showed that infant mortality was far higher in the working class than in the upper classes. This continued all the way through to the Depression years (3). There was a brief period of increased social and health equality after the 2nd World War, but those trends were reversed in the 1980’s (4) after Margaret Thatcher started to rationalise the welfare state, and the utter shit Tony Blair degraded it into a dependency state.

And now we are going back to Victorian times. Economic inequality in Britain has increased dramatically over the last three decades (5). Life expectancy is falling once again, particularly among people on lower incomes who are more likely to consume foods and inhabit housing that damages their health (6, 7).

During the last two decades, men living in the most affluent boroughs of London could expect 17.5 more years of healthy life than those in the least affluent ones (8); with some gradients so strong that when travelling east on the London tube from the reptile house of Westminster, life expectancy falls half a year with every stop (9). Britain is in lockstep with the USA (10), and with every other nation (11-20) where political and financial players allow Big Phood to sell their toxic ultra-processed products, and use Covid as a political tool to reduce our freedoms (21).

Healthier diets are more expensive (22-24), and as times get harder, consumers turn to cheaper calories (25, 26). These come in the form of energy-dense and usually ultra-processed foods which have a higher content of fats and sugars and greatly reduced nutritional density (27, 28). Those with less discretionary spending power (lower socio-economic groups) are particularly affected. This leads directly to class-based differences in health outcomes and expectancy – and generational changes also.

The Millenials are famously prone to buying perceived health-denoting and virtue-signalling brands. Rising student loan debt, however, combined with falling salaries, the growing gig economy, the general decline of the West and increasing centralisation and social control everywhere guarantee that most Millenials will be unable to maintain their aspirational lifestyles. They too will be herded into the ultra-processed aisle, leaving real food to a very much smaller group of the elite and their enablers.

This means that while we are not at the Eloi / Morlock fork in the road yet, we’re on the way there.

Consider the Barker hypothesis and epigenetic shift (29), which appears to have significant predictive value in nations eating a modern diet (30-31). In mammals like us, maternal physiology and metabolism act as buffering systems between environmental stresses (including dietary ones) and the developing foetus and infant (32), but our diets have clearly become so unhealthy that they are overwhelming those buffers. This implies that the on-going divergence of two different strains of humans can only become more marked.

It is excruciatingly clear that there are no political solutions for this. It is the failed policies of the traditional left and right that have driven us into this morass, and the self-serving individuals attracted into politics today will never be anything other than part of the problem. If there is a way forward it will have to come from a different quarter.

Big Phood, Big Pharma, the banks, their political whores and their enforcers / regulators have locked us into a profoundly unhealthy matrix. The rules of this matrix make it illegal to tell people that they can use pharmaconutritional tools to cure their illnesses, because these are natural products without pharmaceutical licenses. In this age of lies, telling the truth has become a revolutionary and criminalised act.

We need a modern samizdat. For those who don’t know, this was a subversive activity developed under the old soviet system, when all printing presses and even most typewriters were inventorised. Men and women who cared about freedom copied banned literature, often by hand, and disseminated it to friends or posted single sheets on city walls under cover of darkness.

The modern equivalent would be to post alternative views and information on the walls of cyberspace, but the authorities are all over this. Communications in our culture are being increasingly controlled by a new nomenklatura, with men like Bill Gates, Jack Dorsey, Mark Zuckerberg and Jeff Bezos dedicated to reducing our liberties. In our corner, however, we have the golem of direct marketing.

Direct marketing is a profoundly lateral business model, in which success is intimately linked to the care and attention that players give to those above and below them in the organization. It rewards good behaviour, and while the odd sociopath slips through, they generally do not do well for long. Direct marketing creates small and private spaces where the truth can be shared, where individuals can help family and friends and be financially rewarded for doing so. (I have nothing against the financial angle, a motivator which provides a valuable counter to the increasing centralization of modern finance).

Perhaps you have experimented with pharmaconutrition. If so share your experiences, tell the truth, pass on the torch, become financially independent, grow. Make things better as you pass through. You don’t have to be an Eloi or a Morlock. You can be human.