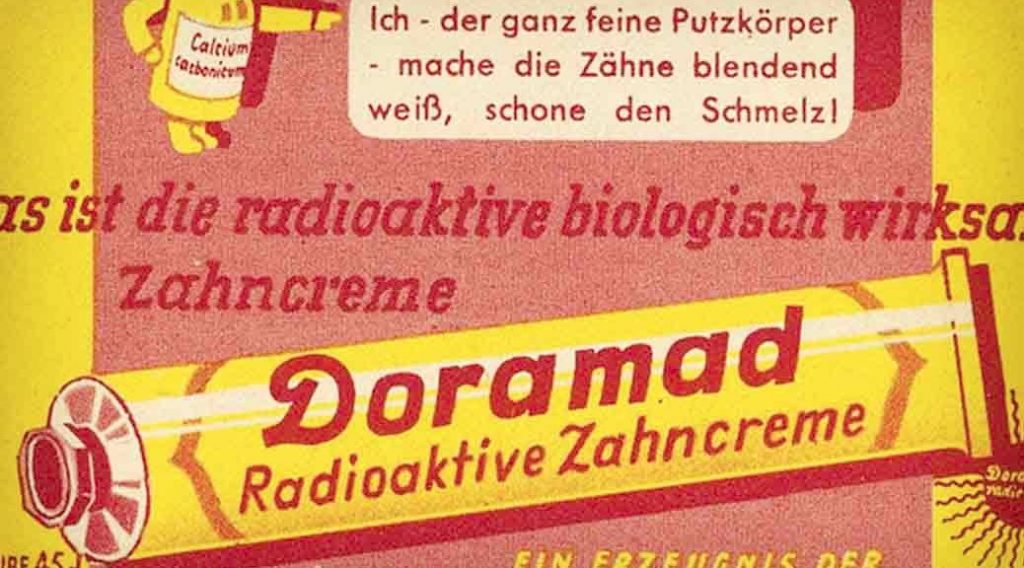 Radium toothpaste for teeth that glow

*During the radium craze, which started in 1903 and ran for a decade or so, you could buy radium-enhanced boot polish, chocolates, cocktails – and toothpaste.

People died of course, and Doramad Radioactive Toothpaste, like its users and the radium they ingested, decayed and faded away. Then came fluoride which, unlike radium, enhances dental health. Some think it might be linked to neurodevelopmental issues, but the case does not appear to be a strong one (1). And there also came titanium, mostly in the form of titanium dioxide (TiO2).

While fluoride has one health-positive effect, TiO2 has none. It is used to make toothpaste brighter and whiter; and it is also used to colour paint, paper, cosmetics, pills and food, where it is known as E171. In fact, TiO2 is everywhere. It has been around for a century (it was introduced around the same time as radium), and until recently was considered inert and safe.

About 25 years ago, I first heard that titanium might not be so safe.

At a small meeting of immunologists at the Middlesex Hospital, chaired by the impeccably bow-tied Jonathon Brostoff, I listened as an eminent scientist told the group he had found nano-particles of TiO2 inside M-cells.

Located in the mucosa-associated lymphoid tissues of the intestine, M-cells play a key role in selecting the initiation of immunity or tolerance. They sample the contents of the gut lumen and pick up micro-particles such as calcium phosphate (CaPo4) particles, which influence immune responses due to their ability to carry proteins and other bio-molecules into the MALT. M-cells also swallow particles of TiO2.

Ingested CaPo4 particles dissolve but TiO2 particles do not, and the scientist – to my shame, I do not remember his name – reported that they accumulated over time. He thought it would lead eventually to M-cell dysfunction or death. This idea gathered dust for a quarter century until I stumbled across a paper written by Swedish researchers Fredrik Berglund and Bjorn Carlmark (2). They concluded, ‘Yellow Nail Syndrome is caused by titanium… predominantly from implants’ (2).

YNS is rare and sounds innocuous enough, but the yellow nails are often accompanied by lymphedema and respiratory symptoms such as repeated infection, chronic cough, sinusitis, and bronchiectasis. The Swedes’ evidence and their logic was convincing, and supporting evidence from other researchers started to accumulate.

YNS was linked to titanium in dental amalgam (3), orthopedic implants (4) including a titanium pace-maker (5), and titanium (as TiO2) in toothpaste (6).

Dermatologists at New York Presbyterian found titanium in the nails of YLS patients but not in controls (7), and showed, like Berglund and Carlmark before them, that removal of the source of titanium could lead to resolution in some (but not all) cases.

Evidence emerged that titanium implants could be corroded by salivary acids (8).

A review of titanium toxicology worried about corrosion and abrasion of dental implants creating micro- and nano-particles of titanium and titanium alloys, which if deposited locally could cause local inflammation and implant failure (9). They also considered the deposition of TiO2 particles in remote tissues giving rise to YNS, and listed some previously unrecognized problems; other groups had found the same particles in the bone marrow of humans (10) and the brains of mice (11).

The situation changed again when the chemical industry started to produce large amounts of nano-TiO2. This sexy new material entered the cosmetic industry as an UV-absorbing active in sun-screen products, and once people became aware of nano-technology they realized that even standard TiO2 powder could contain up to 30% nano-particles (12).

This was starting to look like a real problem.

A Dutch group looked at levels of TiO2 ingestion by the general public (13). Major sources were identified as toothpaste (young children only), candy and ice cream, coffee creamer, fine bakery wares and sauces. Mean intakes of TiO2 nano-particles were estimated at 0.19 μg/kg bw/day in the elderly, increasing to 0.55 μg/kg bw/day for middle-aged and younger people and reaching 2.16 μg/kg bw/day in children due to their higher intake of confectionery and their tendency to swallow toothpaste.

In a follow-up paper they identified potential health risks involving the liver, ovaries and testes (14).

In the background, other teams had discovered that not only the size but also the shape of the nano-particles was important (ie 15-17). Inhaled nano-particles of TiO2 exert significant effects on various cell populations but nano-rods turned out to be very much more toxic (18, 19). They cause inflammatory responses similar to those caused by crocidolite, which also has a nano-fibrous structure and is the most virulently carcinogenic form of asbestos. The longer the TiO2 nano-rods, the more toxic they are (19).

This presumably relates to damage caused by nano-fibers to intra-cellular structures because the same pattern of toxicity, with nano-particles being safe and nano-rods being carcinogenic, occurs with carbon (20).

Despite these findings EFSA, which in my view has an excessively pro-industry bias, declared TiO2 safe in 2016 (21). In the following 36 months, however, EFSA’s position was comprehensively undermined by two new pieces of evidence.

An Italian / Belgian group fed large doses of food grade TiO2 to mice, and found accumulation of titanium in the gut mucosa and liver with pronounced inflammatory responses (22).

The icing on the cake, however (and icing, particularly white icing, is chock-full of TiO2), was a report by a very reputable team out of France and Luxembourg showing that rats consuming food grade TiO2 at human dietary levels accumulated TiO2 in their Peyers Patches after a single week (23). After 100 days of a quasi-human diet the rodents developed intestinal pre-cancerous lesions; and there is evidence that these effects are exacerbated by dysbiosis (24, 25), now prevalent in the human population.

In 2020 the French government, cornered by these findings, uncharacteristically hoisted the white flag and banned TiO2 in food sold or manufactured in France (26). They cited ‘possible harmful effects in humans and a lack of scientific data to confirm safety’.

I believe this is the correct approach, and that other nations will probably follow suit.

New evidence showing that nano-TiO2 can penetrate skin and cause damage in the skin and liver (27, 28) raises a question mark over the continued use of TiO2 in sunscreens also.

More speculatively, industrially produced nano-particles of TiO2 in polluted air may well be contributing to the increasing incidence of neurodegenerative disease (29-31). This potential problem, and the possibility that the industrial use of TiO2 nano-particles could be causing wide-spread damage to the ecosystem (32), may eventually lead to further bans.

TiO2 is not a major cause of disease in humans, but it is probably a minor one. If the only cost of banning E171 is off-white cake icing and coffee creamer, that seems like a price worth paying. ‘Green’ forms of nano-TiO2 produced by plants such as Moringa oleifera are claimed to be safer, but that remains to be proven.

The future may be bright (eventually), but it may not be bright white.

Next week: To sleep, to die, and dream of milk. A new approach to cancer.