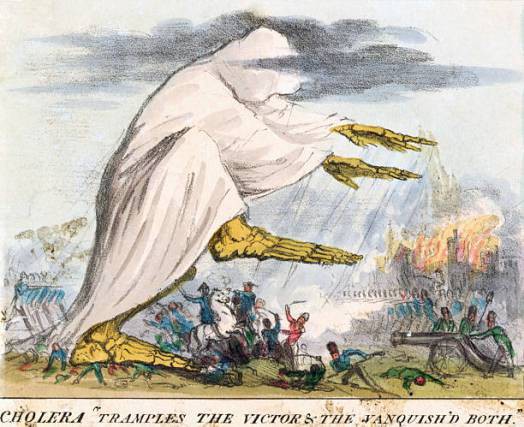 The miasma theory can be traced back as far as ancient Greece, although the term ‘miasma’ only appears in the 17th century. It held that miasma, the foul smell given off by soil polluted with sewage or other organic waste, caused disease. Plagues such as cholera and the Black Death were supposedly caused by miasma. Malaria, which was prevalent near the swamps where mosquitos bred, derives from the Italian mala aria (bad air).

Viewed though today’s thoroughly enlightened lens miasma theory seems absurd; yet it survived right up to the end of the 19th century, when it was replaced by germ theory, because it had real world value. Draining swamps made the air smell better, killed off mosquitoes and terminated malaria epidemics. Removing human waste from where people lived reduced the burden of the many infections transmitted in raw sewage. Miasma theory worked, until Louis Pasteur, Joseph Lister and Robert Koch looked beyond it and laid the foundations of the modern medical paradigm. I have admired those three men for as long as I can remember, but it is only by placing them in an historical context that one can glimpse what truly radical and creative thinkers they were.

Miasma is a mixture of gases including methane (CH4), hydrogen sulphide (H2S), nitrous oxide (NO), ammonia (NH3), sulphur dioxide (SO2), carbon monoxide (CO), hydrogen (H2), carbonyl sulphide (COS) and the volatile liquid carbon disulphide (CS2). In swamps, these compounds are mainly generated by soil microbes. We may not be creatures from the swamp but we are certainly cousins to the life forms that live there, and there is a huge overlap between our hologenome and theirs; so it is not surprising that all of these gases are produced in the human body too. Some are formed in our human cells where they act as gasotransmitters, messenger molecules which direct a wide range of physiological processes in health and disease. Several are produced by microbes that inhabit the large bowel, and these have effects locally and possibly remotely which, if proven, could qualify them as secondary gasotransmitters.

For those unfamiliar with the term, gasotransmitter refers to the general condition of these compounds in nature. Inside us they are solutes – and we are aerated.

Where classical messenger molecules such as hormones act by amplifying signal cascades, gasotransmitters primarily act by reacting directly with intracellular proteins or structures. Classical messengers are stored, released when needed and may act over considerable distances and for protracted periods of time. Gasotransmitters are synthesized on demand and act very locally and rapidly. And, they are very important.

As H2S, CO and NO are also potentially very toxic, humans and other organisms encode specialized enzymes that synthesize and break them down, keeping them within strict and functional limits. Their biological actions are intimately inter-connected (1-3), and drugs, food derivates and in some cases inhalational devices which modify levels of gasotransmitters are being developed as therapeutic options.

Methane, hydrogen, carbonyl sulphide, sulphur dioxide, carbon disulphide and ammonia are in a different category. Methane’s actions are non-enzymatically controlled and it is not yet clear whether this gas can be usefully manipulated. Hydrogen is produced in the bowel by bacterial fermentation of prebiotic fiber and has many potentially therapeutic effects, but its importance to our health remains to be proven and it probably should not be regarded as a gasotransmitter. Carbonyl sulphide, sulphur dioxide and carbon disulphide may just be extensions of H2S; and with ammonia there is just not enough data. Yet.

The first of these gases to be characterized in science was H2S. The 17th century Italian physician Bernardino Ramazzini wrote about eye damage in workers who cleaned cesspits, and speculated – correctly – that this was due to the same gas that blackened their silver and copper coins (4).

The first gas to be formally identified as a gasotransmitter was nitrous oxide. It was named ‘molecule of the year’ by the journal Science in 1992, and was the subject of the Nobel prize in physiology and medicine six years later. NO was made notorious by sildenafil and is by now fairly well characterized. Briefly, inducible NO synthase (iNOS) and endothelial NO synthase (eNOS) present diverse targets in vascular, respiratory and immunological medicine, and neuronal NO synthase (nNOS) produces NO for a select group of mostly GABBAergic neurons in the hippocampus which play a role inter alia in sleep regulation and neuronal death. Drugs and supplements containing l-arginine which increase NO synthesis are in wide use.

The next two gasotransmitters to be discovered were H2S and CO.

H2S acts in tandem and in equilibrium with other reactive sulphur species such as persulphides and polysulphides. These molecules modify the function of target proteins by reacting with the metal atoms at their active sites, such as occur in heme proteins. In chemical terms, it is the same reaction that Ramazzini saw on his patients’ coins. H2S is involved in inflammation, gut motility, oxidative stress, vascular tone, neuromodulation, cryoprotection, memory formation, hormone secretion, apoptosis and many other vital biologic functions (5 – 7).

Most H2S formed in the body is produced in the large bowel when sulphate-reducing bacteria such as Desulfovibrio piger gain access to dietary sulphates. The numbers of these bacteria and the rate of H2S production are largely driven by the amount of sulphate in the diet (8, 9). It is probably not a good idea to consume too much sulphate as H2S in excess is irritant, corrosive, a likely carcinogen and implicated in ulcerative colitis (9-12).

In the gut, sulphate-reducing bacteria compete with methane producing bacteria for hydrogen, and people tend to be either methane producers (which you can detect with a breath test) or H2S producers (13). It is not yet known which is the healthier option, but if the question is ever resolved it would be difficult to switch from one to the other via dietary means alone as sulphur occurs in so many different foods. Drugs are unlikely to work either. H2S is a key microbial defense against antimicrobials (14), so sulphate reducing species are pretty much immune to most antibiotics (15).

In low doses, however, H2S is a promising candidate in the treatment of inflammation, visceral pain, oxidative stress related tissue injury, ulcer healing and thrombosis (16-18). Pro-drugs that deliver H2S when and where it might be needed are under development (19, 20). Paradoxically, H2S can promote or inhibit cancer growth (21), and compounds that inhibit cystathionine-β-synthase, the main mammalian enzyme that produces H2S, are being explored as possible oncology tools.

Related sulphur compounds with functions that overlap with those of H2S have been tentatively identified as gasotransmitters in their own right. These include sulphur dioxide (SO2), which appears to have predominantly anti-inflammatory effects (22-25), the volatile liquid carbon disulphide (26), and the gas carbonyl sulphide (27, 28).

CO is formed in the body by the inducible enzyme Heme oxygenase (HO1). HO1 acts on the heme released by ageing or damaged erythrocytes to form biliverdin, which is rapidly metabolized to bilirubin. Bilirubin is an antioxidant cytoprotectant acting in parallel with (and as important as) glutathione (29), and HO1 is considered to be an alarmin or stress-response protein. It is activated in trauma or other situations where significant numbers of red blood cells are damaged, and acts in conjunction with Nrf2 to protect against oxidative stress injury.

CO is anti-inflammatory and cytoprotective (30-32), but it also has very specific functions in determining sensitivity to light (33). Heme in the retina is damaged by light and the resulting increase in CO is a link in the chain of events which constitute sleep / wake cycling (34-38). This also appears to be part of the mechanism whereby SAD responds to bright light (33, 35).

CH4, H2 and NH3 are all produced by gut microbes and levels of these compounds, along with the established gasotransmitter H2S, are affected by the complex interactions between dietary input, colonocyte function (39) and host genes (40). If any of these gases are ever shown to exert health benefits, it will raise the possibility of targeted dietary intervention.

If CH4 is a gasotransmitter, it is one that acts primarily in and around the mitochondria (41). It is formed there, and is thought to exert its anti-inflammatory, antioxidant and anti-apoptotic effects (42-46) via non-specific physico-chemical alterations to mitochondrial membranes (41, 47).

I have a long-standing interest in H2, due to its ability to act as a potent scavenger of free radicals in all tissues and as one of the few antioxidants that enter mitochondria (48). H2 has many biological effects including anti-inflammation, anti-oxidation, anti-apoptosis, anti-shock and autophagy regulation, and has showed therapeutic promise in the management of infection, cancer, trauma, ischaemia-reperfusion injury and stress (49-55). H2 metabolism impacts on H2S metabolism, and their effects may therefore modulate each other (8). Strictly speaking, H2 is not a gasotransmitter; it is not formed in our cells but by fermentation reactions in the gut. As these fermentation reactions are enhanced by consuming more prebiotic fiber, this may be one way in which these important dietary constituents promote so many aspects of health.

Long known as a product of putrefaction, this is also a new candidate gasotransmitter (56). Its current status is unclear.

Postscript … Swamps generally contain large amounts of clay, one reason they do not drain. At least 4 major religions have us originally fashioned from clay, and the theory of lithogenesis has a delightful resonance. Word players have probably already divined that this post is an off-key tribute to that most aerated of fighters, Muhammed Ali.