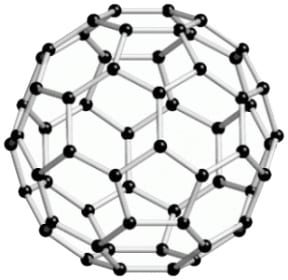 C60 (carbon-60) is generating a lot of interest in alternative medical spheres. The third form of carbon after graphite and diamond, C60 has a man-made molecular structure resembling a football composed of inter-locking pentagons and hexagons of carbon atoms. And while we are on the subject of tiny spherical objects, it is also something of a hot nano-potato.

This entirely synthetic form of carbon is biocompatible and possesses potent anti-oxidant activity (1). This interesting combination of properties has lead to some hailing C60 as the latest super-antioxidant; you can buy it on Amazon pre-dissolved in olive oil (which makes it sound super-friendly), and it is claimed to be a sovereign cure for all evils including cancer, ageing, rogue insurance salesmen and scrofula.

As a clinical pharmacologist I am very cautious about ingesting anything that is not naturally occuring, or indeed anything that is not derived from an established food source. So when a cannabinoid friend from my Amsterdam days (it was the ‘60’s) told me about this new panacea, my initial reaction was sceptical. But the history of C60 is certainly interesting …

C60 molecules are variously called buckminsterfullerenes, fullerenes or just Buckyballs, after Buckminster Fuller, the scientist who discovered them.

Buck Fuller was a hip name to drop a half century ago, as he not only generated radical-sounding ideas (he rather famously said the best way to overcome a failing system is to create a new one that makes the old one obsolete), he also invented the geodesic dome.

Geodesic domes were all over High Times and the Whole Earth Catalogue back in the day, as they were clearly the shape of the future. You can see them in science fiction visions of the time such as Woody Allen’s Sleeper. This kind of dome (basically a Buckyball cut in half) was touted as the ideal roof; being light, cheap, strong, and with low wind-resistance. Unfortunately it also tended to leak, as there were so many panels that had to be exactly aligned and sealed. When dope was in the mix, the chances of success were even lower.

I prefer Buckminster’s ideas about regime change, which are if anything even more relevant today. So many of our institutions, from political parties to regulatory systems, have become screamingly dysfunctional because they have not been able to escape their 19th century roots; with all the prejudices and perspectives of those times still baked into them, and with the usual stakeholder groups clinging like lampreys to the wreckage of their obsolescent models.

Nowhere is this more true than in medicine where most of the profession still believe, against all the evidence, in better life through (synthetic) chemistry. We have had a century of pharmaceutical progress, yet public health is failing.

The degenerative diseases are increasing in frequency and decreasing in latency, so much so that life expectancy is falling; but due to institutional myopia, and an obsession with the outmoded Pasteurian idea of specificity, the majority of medics still do not understand the critical importance of pharmaconutrition.

I used to find this regimented opacity quite baffling, but Upton Sinclair showed me the way. As this great 20th century writer put it, it is hard to convince a man of the truth when his livelihood depends on a lie. And basically our doctors are living a lie, mostly unwittingly, some cynically and some – in more primitive and punitive systems such as Poland, under extraordinary duress. Good doctors there are routinely stripped of their medical licences for straying from Big Pharma’s algorithms, even when there is science to justify their approach and their patients thrive. Polish politicians are notoriously corrupt, and many of them are Buckyballs deep in Big Pharma’s pockets.

So is C60 the way, the truth and the light? Of course not. However, it may have some interesting applications.

The idea that C60 might be life-extending emerged in 2012, after the publication of a rodent study that was originally set up to measure fullerene toxicity. Much to their surprise the researchers found that far from being poisoned, rats that drank fullerene-flavored Koolaid lived longer than the placebo group. This was not just a 5% or 10% increase, but a near doubling of life expectancy (2).

Soon afterwards, several teams of physicists showed that C60 was a highly effective antioxidant and demonstrated that this compound was a potent radio-protective agent (1). Others showed that C60 was taken up into mitochondrial membranes (3), providing a possible rationale for the longevity data; oxidative damage to mitochondria is thought to be an important element in the senescence sequence, so C60 might be able to postpone ageing via mitochondrial sparing.

Unsurprisingly, C60 supplements started to appear on ebay and Amazon. I’m not sure how (or if) they passed regulatory muster, as C60 is both novel and synthetic; it does not occur in any foodstuff and the only natural source is shungite, an obscure mineral found near St Petersburg. But the science kept coming.

Fullerenes were found to reduce oxidative damage in exercised muscle (4), prevent intestinal damage in model of ulcerative colitis (5), and enhance cancer cell killing in a photodynamic system (6). C60 was also proposed as a breakthrough dermatology agent in the treatment of both inflammatory and cancerous conditions  (7). So, C60 supplements are for athletes, colitis sufferers, dermatology patients, those who worry about radiation hazards such as those generated by 5G (I am one of them), and for anyone who wants to live longer.

Not so fast. The antioxidant theory is somewhat busted. Studies with antioxidant supplements produced null or negative results, and it became obvious that ROS signalling is critical for many cellular functions. Large doses of potent antioxidants are inherently likely to cause problems.

These data are a red flag for C60, at least in aquatic vertebrates. And in the background, the carbon nanotube story was starting to unfold.

Whereas C60 fullerenes are spherical, the chemically identical carbon nanotubes are, obviously, tubular. They are also potent carcinogens. So potent, in fact, that a single exposure is sufficient to induce mesothelioma even more reliably than asbestos (9). Other papers confirmed this, showing bio-persistence, chronic inflammation, carcinogenesis and teratogenesis in several species (10, 11).

Biohackers beg to differ. Some of them have been taking C60 for years and say it improves their mental clarity, energy levels, athletic performance and mood; promotes better sleep and wound healing, reduces anxiety, restores hair colour, makes them feel younger and increases the chances of promotion at work. (I may have made the last one up).

If people are determined to self-experiment, I can’t stop them. Nor do I want to, because as Buckminster said, the best way to overcome a failing system is to create a new one that makes the old one obsolete. But although the idea of using Buckyballs to enhance human health is very Ghost in the Shell, I am not convinced that C60 is the way forward. And in any case, the new system is already taking shape elsewhere, specifically in Oslo and Göteborg. The pharmaconutritional tools developed for Zinzino AG are pushing the pharmaceutical model back on its heels, recruiting doctors in droves and salvaging tens of thousands of patients.

Carbon chemistry is tetravalent, however, and very flexible. Fullerene derivatives are being actively researched, and I would not be at all surprised to see second- or third-generation C60 molecules eventually emerge in the therapeutic space as drugs, diagnostic aids or gene delivery vectors.